‘It takes it back to the more horror genre that the first film used, and seeing the xenomorph creeping around, killing people in the shadows was pretty cool’

After a fire causes Ripley’s ship to crash land by a prison, it’s soon discovered that a xenomorph was on their ship all along and begins taking out the prisoners one-by-one. In the two previous films the cast has been so large that you know the xenomorph will kill soon enough, but they gave you enough of a reason to care for their lives. In Alien 3 you find yourself just waiting for the needless people to die, and with every death you just don’t care. And if you don’t care for those who die, you find yourself not caring for their killer.

For the first time in the franchise, Ripley is shown to have a sexual relationship with someone; with Clemens (Charles Dance) being her friend while she’s there. The relationship came from nowhere, served no purpose and didn’t lead anywhere. So, what was the point? There’s also a scene where Ripley is nearly raped by a gang of the prisoners and a lot of focus on the fact that Ripley is a woman in a man’s prison. And a random scene whereby Dillon (Charles S. Dutton) asks Ripley to be the leader, but a few minutes later questions her credentials in being a leader. Early on it’s hinted that Ripley has a psychic link with the xenomorph, as she suffers a nose-bleed the moment it is born and wakes up suddenly the minute it kills. Ripley also lies to everyone early on about wanting to examine the bodies for a disease, when there was no need to and that never went anywhere. So, what’s the point? So much of the script is nonsense.

And there’s a good reason for that: it was often filmed without a script. Alien 3 is known for having a shambolic production, with an estimated $7m being spent before filming even began. Its director, David Fincher, has since disowned the film, once stating ‘No one hated it more than me; to this day, no one hates it more than me’ and blamed the producers for their lack of trust. James Cameron (director of Aliens), called the decision to kill off his characters as a ‘slap in the face’ and Michael Biehn expressed his disliking of the film and demanded to be compensated for them using his likeness in one scene. It also lost its cinematographer, Jordan Cronenweth, as he began suffering from Parkinson’s disease and was forced out of his position. Fincher isn’t the only person to disown their part of the film, with one-time writer Eric Red also disowning his script due to it being ‘the rushed product of too many story conferences and interference with no time to write, and turned out utter crap.’ The fact that so many writers and so many directors were involved in coming up with certain aspects no doubt explain how so much is just confusing. 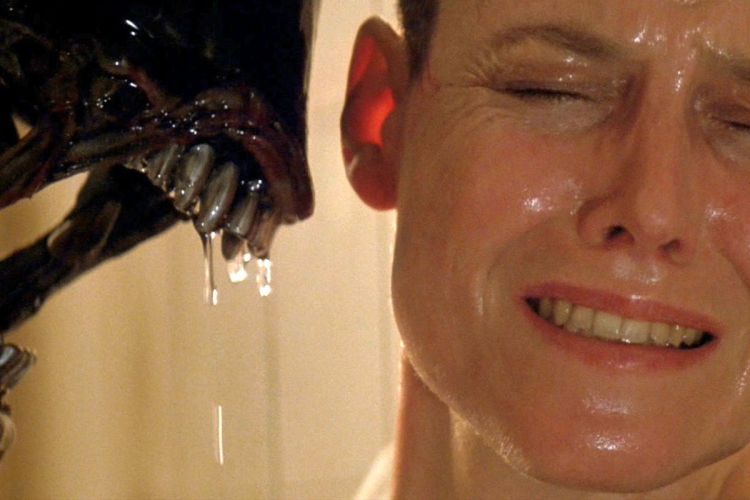 A subplot also develops that the Weyland-Yutani team (who were coming to rescue Ripley) are discovered to want the xenomorph to study or train, which, again, is the same as the first two films. It could have been done well enough if this trilogy was planned in advance, but it wasn’t so their arrival just felt anticlimactic and lacklustre.

Alien 3 should have gotten a worse grade, but aside from all of its negative points it still retains some of the parts that made the Alien franchise so successful in its infancy. It takes it back to the more horror genre that the first film used, and seeing the xenomorph creeping around, killing people in the shadows was pretty cool. It also maintains fairly impressive visuals, although, strangely, it seems less impressive than the second (and its budget was nearly three times as much).

Throughout my life when I’ve gone back to the Alien franchise, I’ve stopped after the second one, but Alien 3 is worth a watch for a popcorn horror with a pretty decent villain and plenty of expendable characters.