David (Bruce Willis, The Sixth Sense), a former American-football player who had to retire after a car crash who now works in security, is the only survivor of a major train crash, leaving the hospital without so much as a single scratch, and soon begins to realise he is unbreakable. Elijah (Samuel L. Jackson, Kingsman: The Secret Service), meanwhile, is the polar opposite: he breaks his bones far too easily (due to Type 1 osteogenesis imperfecta) and sees David as a comic book hero who must use his invisibility to fight crime.

While at its core it’s an origin movie for a superhero, it’s also a very good drama about David’s past and his current love life. At the start he’s flirting with another woman while removing his wedding ring and throughout the film more and more details are revealed about the history and current status of his relationship with Audrey (Robin Wright Penn), his wife. There are some really nice moments and reveals (such as her not wanting to initially date a footballer) and their son, Joseph (Spencer Treat Clark) also goes on his own journey as he really wants David to be a superhero; even so much as to get into a fight to test his own breakability. The level of superheroism is very minimal with just a quick incident towards the end, putting most of the emphasis on the dramatic side of the film, but there’s enough, especially with Elijah’s past and his sadness over his own illness and love for David’s seemingly unbreakable body, that make this a very explored superhero origin story, and make Unbreakable a brilliant genre-blending film between two genres so rarely combined. 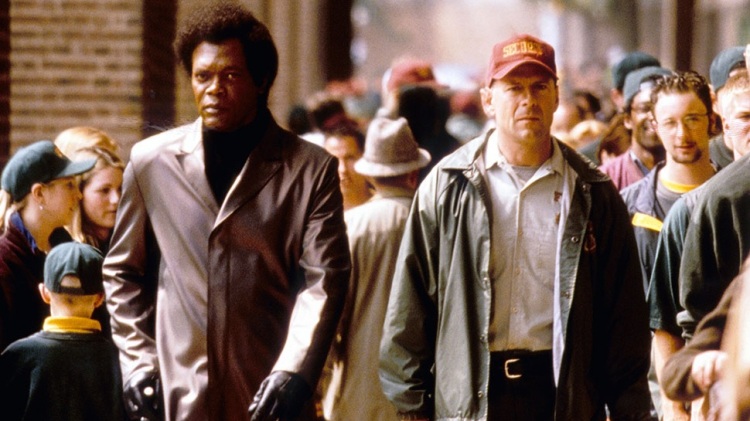 The lack of heroism from David (and the rather lacklustre ending, twist-ending aside) do hamper this film somewhat; especially considering an hour or so into the movie we’re sitting down with David and Audrey as they have dinner when by this point the film should be moving forward in a more clear direction, and David’s powers are never fully explained (his unbreakable nature isn’t given a reason nor is his ability to sense the evil in someone by coming into contact with them). It also confused me why there wasn’t more of a focus on how he survived the train crash by the other citizens of the town. In the hospital people look at him with a mixture of awe and fear yet there’s no real reaction to this; it sort of looks like it’s a regular occurrence in this world and the people are just frightened at seeing one up close, rather than the complete implausibility of someone being the only survivor with no explanation for his survival. A lot of the MCU and DCEU films lately have focused on the idea of humanity rejecting these heroes for being too strong and that element would have been a nice addition to this film.

While not as good as The Sixth Sense, and the twist was quite clever but obvious, Unbreakable is still a very interesting blending of two genres and presents a look on a more drama-inspired side to the lives of superheroes. It feels like it should have had a sequel (M. Night said there was a plan for a sequel but it never came to fruition in the aftermath of the film’s success) to build on the characters, but that aside it still works very well.