Veronica is a Spanish horror film based on the real life story of Estefania Gutierrez Lazaron, who reportedly suffered hallucinations and seizures for six months after she and a couple of friends performed a séance at school. Veronica, however, changes up a few factors (the character is called Veronica (Sandra Escacena) rather than Estefania, the time period is three days rather than six months and the reason for the séance is different) to make it more of a traditional horror film.

While I wouldn’t agree with the quotes coming out from it that it’s the scariest film of all time, it certainly is very good and very creepy at times; which is impressive considering the film is essentially about a schoolgirl using a Ouija board (which are generally pretty poor films). It’s also made slightly creepier with the fact that Veronica has to basically mother and protect her three younger siblings as their mother works late shifts at a café and sleeps most of the day. This is really hammered home later on in the film as a desperate Veronica struggles to find a way to save her siblings and fend off whatever evil spirit is torturing her. She’s abandoned by her friends and her family, essentially (with her mother working and her father having passed away), she’s left to fight all by herself and that terrifies her and allows us to truly sympathise with her struggles. 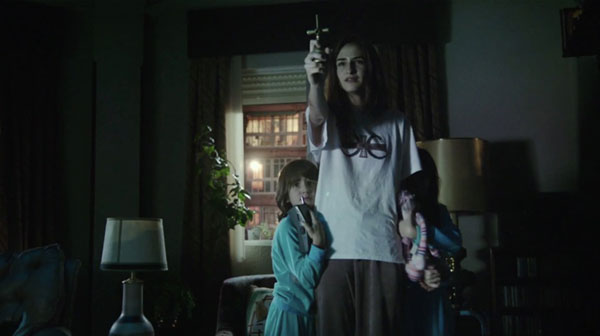 I mentioned during my review of Hereditary that there was one scene which will probably live long as my favourite scene in a horror film purely because of how it’s done (the evil entity in the background isn’t acknowledged by a soundtrack, and, in fact, is barely noticeable initially), and Veronica does utilise a similar style at times, which I loved. One scene of Veronica going downstairs for a drink is made all the more terrifying by a shadow walking in the background with no music or camera angles to highlight to the audience that it’s there. It does this a few times and it did up the creep factor somewhat but it let itself down by adding in a few jump scares at times, which was disappointing considering the film was excellent up to that.

The biggest surprise for me, however, was the actors. It’s not often that a film with four actors under the age of 16 (three of which are probably under 10) give such commanding performances. Sandra Escacena, especially, is fantastic; perfectly combining the look of a teenager with the motherhood and bravery of an adult, while all the while having that childlike demeanour about her. The kids are also really good in this film and help convey the right emotional tone at the right time.

The opening and the ending tell a rather nice story, too; the film opens up with a phone call to the police from a hysterical woman claiming someone’s in her home and we see the detective arrive, look on in horror and cut back three days to the beginning of the ordeal, and it ends with the detective typing up his report, including the supernatural elements he saw (one of only a few official police reports to include supernatural elements, which made this story quite popular in the early 1990’s). So it means the whole story is about his police report (which is what this film is based on) and everything he includes at the end is told throughout the film quite nicely (including the creepy stains under the bed) as well as authentic photos of the real life case of Estafania, which was a nice touch.

Overall Veronica is a fantastic film with great acting and a string of truly creepy moments (although I didn’t struggle to finish it, despite some suggestions that it’s very hard to finish).  The story isn’t too original, however basing it on a true story means that it’s acceptable, however it’s a shame they didn’t try and stick to the original six-month timeline to truly force Veronica into a state of insanity and fear. But a thoroughly entertaining horror film.