‘On the whole, including the brutally beautiful final sequence of the aliens destroying a city, the film looks beautiful’

Based on H. G. Wells’ novel of the same name, The War of the Worlds takes place in California (not England, as the novel originally set the story in), and tells the story of the day aliens landed on earth, seeking a new planet to call home with Mars’ depleting resources. Despite being greeted by white flags on the night they exit their pods for the first time, the aliens soon begin to destroy everything in their wake; impervious to our best efforts to stop them.

The running time for this film is less than 90-minutes, and, yet, despite this the aliens’ first appearance isn’t for quite some time. The film brilliantly builds up to the pod’s unveiling, with the townspeople, including Dr. Clayton Forrester (Gene Barry) and Sylvia van Buren (Ann Robinson), partying the night away while waiting for the meteor (as they believed it was at the time) to cool down to be studied. While it’s not always a successful way of doing things, sometimes building up to the grand reveal works so much better as it makes the aliens seem like more of a special attraction, rather than simply unveiling them at the start and ruining their mystique. It’s also beneficial as there’s no immediate panic, instead curiosity with the pod landing in ways which isn’t normal to normal meteors. It makes you feel more invested, and more like you’ve earned the right to see the creatures when they finally arrive because you now know the story behind the city and the characters. 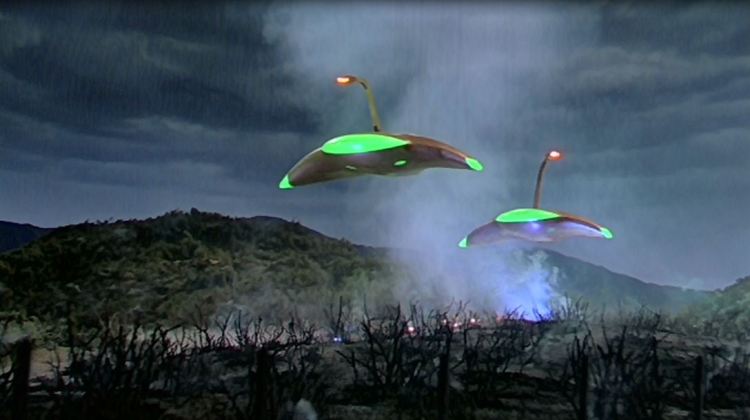 The acting is fairly solid throughout, despite a rather inconsistent performance from Ann Robinson, appearing in her first leading role with The War of the Worlds, but generally everyone else was fairly decent. But the biggest praise has to be awarded to the visuals (for which it was an Academy Award). Sometimes, looking at it with a 21st-century eye, they are quite comically bad (especially when we are first introduced to the aliens outside of their pods), but on the whole, including the brutally beautiful final sequence of the aliens destroying a city, the film looks beautiful.

There are a few bizarre choices throughout, though, which hamper it a little bit. Towards the end, despite mass evacuations, Clayton gets lost from Sylvia and decides to find her, amongst an abandoned town, in a church. To my surprise (not much to his), he passes through three churches all full of people. I can believe that those left behind would choose faith as their saviour so would go to the nearest church, but it’s not explicitly stated; it comes across as those people chose not to leave the city and instead chose to stay behind knowing the city was about to be destroyed. There are a few other moments like this (such as the pastor, having seen the aliens murder countless people, choosing to try and reason with them) where decisions are a little strange, but overall they don’t detract too much from a thoroughly enjoyable film.